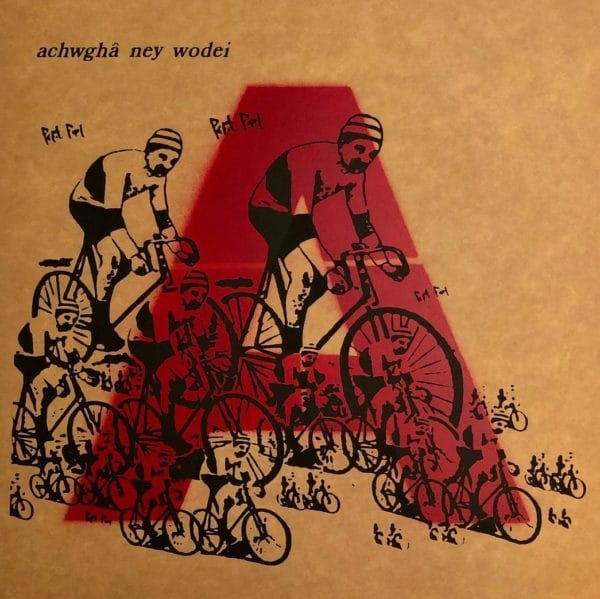 “Achwghâ Ney Wodei was a quartet of François Boitière (drums, keyboards, vocals), Didier ‘Higgins’ Copp (bass, percussion, vocals), Eric ‘Riton’ Sterenfield (guitar, keyboards, percussion, vocals) and Phillippe ‘Wodi’ Royer (percussion, trumpet, bass, vocals). They released a cassette for the French label V.I.S.A. and later, in 1987, a triple 12″ for New International Records, a short-lived by Simon Crab, of Bourbonese Qualk (maybe that should serve as an explanation?). That was the last sign life of his band. This LP is a re-issue of those first cassettes, then housed in a cult plaster Citroën DS model, and now the LP in a handmade cover. I didn’t hear this cassette back then, nor did I hear the triple 12”; it probably was over my budget back then. The band called their music ‘Razz!’, by which we are to understand it is influenced by “Jacques Tati, Blurt, Neu!, Les Frères Jacques, Captain Beefheart, Tex Avery soundtracks, French working class Chanson and music hall, Razz! is an unpredictable sound mass, a comedic blend of oddworldly jazz-funk, repetitive motives, binary syncopated rhythms and narrative voices”; it somehow sounds very French to me. The invention of a music genre reminded me of the invention of a language with Magma, the music not unlike that of Un Department or D.D.A.A., but also with the roots in rock in opposition, Univers Zero. It has humour (which may be lost in translation), strange sounds, weird melodies, odd interjections and surreal notions. Yet the music has sounded like something from the mid-’80s, owing to the world of post-punk and faux-funk, with its rough production techniques and almost danceable rhythms. It is altogether, all nineteen tracks quite a wild ride, but a lovely one. The energy level is kept up with all these short pieces, mood changes, alterations in tempo and lots of funny, captivating and strange voices. A great record and a most welcome re-issue, simply because it seems so out of the ordinary, compared to many other re-issues.” (Vital Weekly)