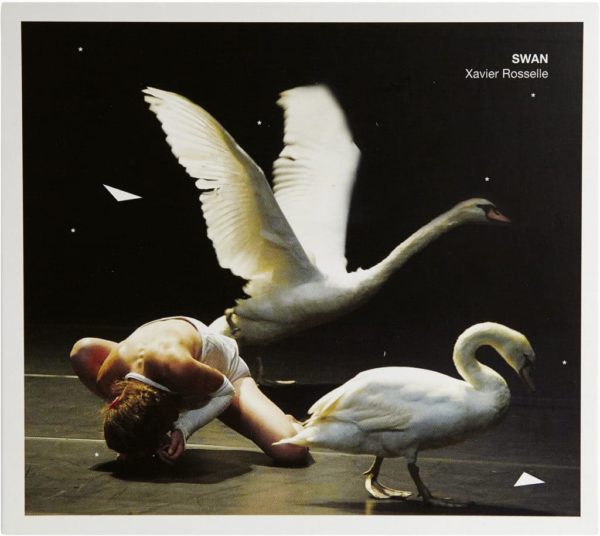 Swan, choreographed piece for 6 female dancers, 6 white and 3 black swans.Concept: Luc Petton. Choreography: Luc Petton and Marilén Iglesias-Breuker. Musical Composition: Xavier Rosselle. After the “Confidence des Oiseaux”, Swan is the second panel of a triptych devoting to the world of birds, but also stands alone as a complete artistic expression. Based upon a concept by choreographer Luc Petton (Le Guetteur dance company), it takes the shape of a dialogue between dance and music. SWAN stands in a poetic space and time where the borders between animalism and humanity, between the elements – air, earth and water – remain undecided. This creation combines the archaic qualities of images with contemporary choreographic representation, acoustic music with electronic sounds, primitive rhythms with modern melody and white with black.
Inspiration was sourced beyond the forms generated by the actual music, writing and presentation. The re-enactment, in real time, of the steps the swans take, of water, of bodies, of cries and sounds of flapping wings – these elements all become super imposed. They merge and end up opposing one another, underscored by the acoustic utterances of a saxophone. A particularly lively yet fragile atmosphere hangs suspended, immobile and dominant, calm yet violent.
Xavier Rosselle, has taken part in numerous creations and concerts as a performer, improviser and composer in France as well as abroad. After three years as part of the “Quatuor de saxophones de Versailles” and “Les Desaxes” (Off their axis), he has devoted his time to contemporary creation and simultaneously founded his own company, “Musique Creation Diffusion”, in 1993 and has set up numerous shows through this channel. His interest in all forms of artistic expression has prompted him to play alongside musicians from a wealth of different backgrounds (including Louis Sclavis and Antoine Hervé) and to write scores for the stage – theatre, puppetry and dance. In 2009, he composed “Radeaux” (Rafts), his first opera taking inspiration from a libretto by Christian
Siméon, directed by Jean-Marie Lejude and created at the Reims Opera house.
For the composition of the soundtrack to Swan, Xavier Rosselle benefited from a government commission. Alongside his eclectic career as a musician and composer, he is also involved in pedagogy. A qualified national instructor, he teaches the saxophone at the Conservatoire à Rayonnement Régional de Reims.