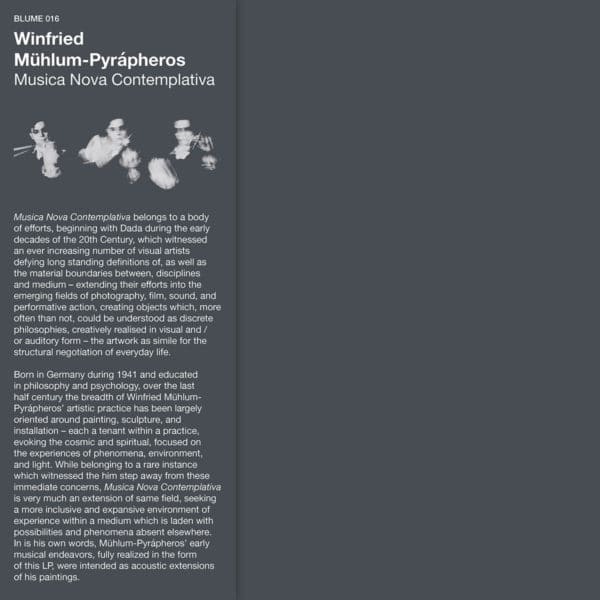 Originally issued in 1970, this stunning creation of its era has, until now, remained among the rarest artifacts works of musical minimalism – echoing idiom’s roots in Fluxus and the raw temperaments of artists like Tony Conrad and Henry Flynt, threaded with touchstones in the work of Eliane Radigue, Giacinto Scelsi, and Jani Christou.

Joining their broad efforts in building networks of context and understanding, spanning historical and contemporary territories of adventurous sound, Blume Editions is thrilled to announce the long awaited return of Winfried Mühlum-Pyrápheros’ Musica Nova Contemplativa. Originally issued in 1970, this stunning creation of its era has, until now, remained among the rarest artifacts in the field of cross-disciplinary efforts known as the Artist Record – sonic adventures embarked on by artists primarily dedicated to the visual realm. Creatively challenging, ahead of its time, and unquestionably beautiful, its rare musicality sets the stage for alternate understandings of what minimalism was, and were it came from, during its early years