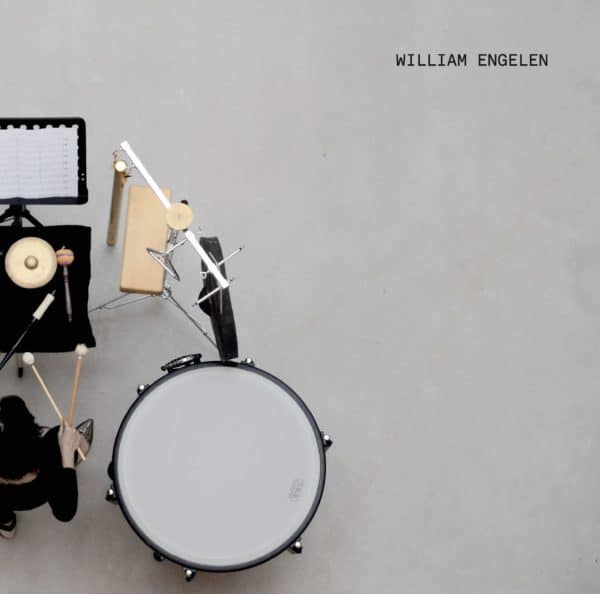 After “Today, the organ has played beautifully again”, released earlier in 2019, Edition Telemark presents the second instalment of what will become a series of LPs of sound works by Dutch artist William Engelen. “32 bpm” was recorded at Kunsthalle Mannheim for an exhibition in summer 2019 and is a slowed down version of “38 bpm”, previously released on Engelen’s double LP “Partitur Belval” in 2016.

The piece – played here by Mannheimer Schlagwerk – is written for 8 percussionists, each using a set of 9 different instruments varying in their timbre and in the duration of their resonance. The composition is played in a monorhythmic pulse of 32 beats per minute and in unison. To determine the order in which the instruments are played, each percussionist draws their own path through the score consisting of a 32×32 grid of dots of different sizes, with larger dots representing instruments with long resonance and smaller dots those with short resonance. Because each musician has chosen their own path, different instruments are played at each pulse. Neither does the pulse ever change nor do the musicians play out-of-sync at any time. As the piece progresses through its 5 parts, more and more dots are skipped, leaving only 64 beats per musician in part 5, as opposed to 320 in part 1.

The composition “38 bpm” was written in 2016 and now adapted by Engelen to take into account the acoustic qualities of the atrium of the Kunsthalle Mannheim, leading to the slower tempo and a different selection of instruments, now focusing on more resonant ones. The instruments played are mokushos, wood blocks, bongos, reyongs, crotales, triangles, timpanis, gongs, and tubular bells. For the performance, each player stood at a different spot and the audience moved freely between them, feeling out the space by listening to the resonance. The piece thus turned into a sound sculpture inside the architecture of the museum.

The LP is a co-release between Edition Telemark and Kunsthalle Mannheim and comes in a full-color gatefold sleeve with a 12-page LP-sized booklet with photos, a reproduction of the score, and extensive liner notes by Björn Gottstein, director of the Musiktage festival in Donaueschingen, and Sebastian Baden, curator at Kunsthalle Mannheim.