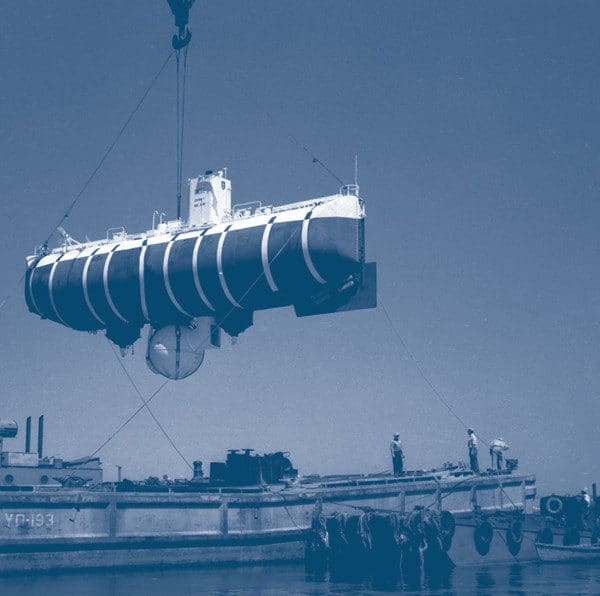 This LP is a split label release with C.I.P.
About the release: The audio on this LP was inspired by early efforts to explore extreme locations on earth, and the clash between the will of humans, the limits of their bodies, and the immutable laws of the natural world – the latter which can easily destroy both of the first two. The 11º 22.4’N 142º 35.5’E side is based on the 1960 dive by Jacques Piccard and Don Walsh in the bathyscaphe Trieste to the Challenger Deep in the Mariana Trench, the deepest known point on earth. This side aims to mirror the combination of analytic scientific preparation and calibration that the team did and the inherent and unavoidable human concern of “if something goes wrong, there’s a good chance we could die”.
The HACE / 26,250’ side was inspired by research on High Altitude Cerebral Edema (HACE), a condition where oxygen is not getting to the brain. HACE has the greatest potential for striking in the Dead Zone, (26,250 feet), where available oxygen cannot sustain human life for more that 3 hours. Of course, for someone aiming to summit Mt Everest, there are “only” 2,750 feet remaining – and, the person still has to descend back through the Dead Zone. With their goal so closely in reach, a climber may sacrifice the rational (saving their life) for the sake of achieving their goal (summiting Everest).
In a nutshell, HACE / 26,250 is a soundtrack for a body closing down; heart rates slowing, blood flow slowing, everything once moist and carrying life slowly becoming brittle, dry, and unable to function due to duress.
About the artist: Vertonen is Blake Edwards and devices – for this LP, the primary device is a Russian Polivoks synthesizer. Based in Chicago, Illinois, Edwards has performed at numerous festivals in the US, as well as toured the US and Japan. In addition to numerous 7″ records, 3” CDRs, full-length CDRs, and split 12” records, Vertonen also has released three CDs funded by City of Chicago grants (as is this record).
Sell points: First full length solo vinyl LP, extremely limited edition, elegant “old style” tip on Jacket by Stoughton Press.
For fans of: Roland Kayn, Hafler Trio, modular synthesizers.
Limited edition of 125.