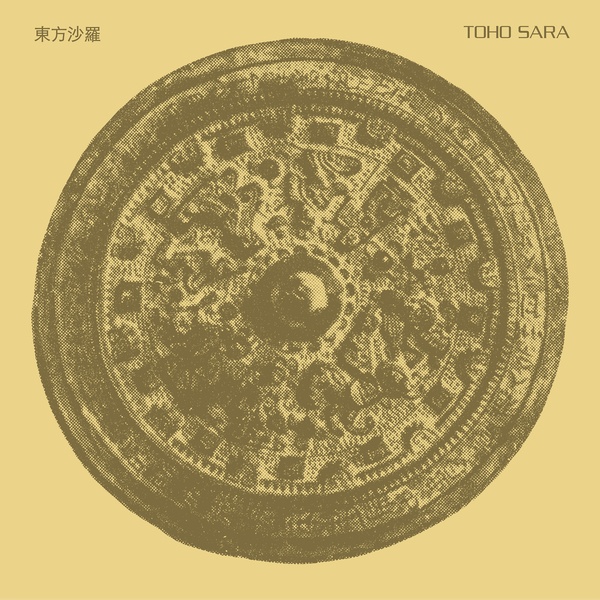 “In 1995, Tokyo’s legendary label P.S.F. Records released two very different albums, connected by the shadowy personality behind them: Nanjo Asahito, well known by music fanatics acquainted with his band High Rise. The pair of 1995 releases, though, were quite different from the brain-scrambling, fuzz-driven, motor-psycho sounds of High Rise. One, by the mysterious Musica Transonic, refracted that distorted rock through a prism that broke it into abstract, free-form shapes. We’re here, though, with regard to the other album, the self-titled debut by 東方沙羅, Toho Sara . . . From the first of the simply numbered songs (no titles here) it’s clear that Nanjo, Kawabata Makoto, and Yasuda Hisashi have something special in mind: the delicate percussion and woodwinds are quickly joined by a much more ominous drone, and they combine brightness with murk throughout the album . . . Nanjo and Kawabata had played together for some time before this album, including a band called Johari, which brought together ethnic and contemporary music. They formed Toho Sara to revisit the idea, focusing on Asian spirituality while experimenting with acoustic instruments. Yasuda joined them after playing in Nanjo’s avant-garde outfit Group Musica, and later played in the early Acid Mothers Temple with Kawabata. Toho Sara translates to Eastern Most, which follows the idea behind the group. Fascinated by shamanism, Nanjo wanted to create an avant-garde musical embodiment of ideas like kagura, ancient ritual theater, and bring it to album and stage . . .The fourth track, the album’s eleven-minute centerpiece, bursts open in a chaotic clatter that barely disperses as mysterious scrapings and bowings come and go, a bewitching accretion of brain-scrambling sounds. It’s a dramatic, eerie, and anarchic passage that would undeniably suit a summoning ritual for Moorcock’s chaos-god Arioch. Some of the tracks are calmer, even peaceful if you don’t mind a bit of ambient dread seeping into your peacetime. Slow drumbeats and gentle gongs are layered with not-quite-atonal woodwinds, intermittent clacks of wooden percussion accent some variety of buzzing woodwind, and droning harmonium underlies clarinet-like slow melodies…” –Mason Jones, San Francisco, CA, 2020