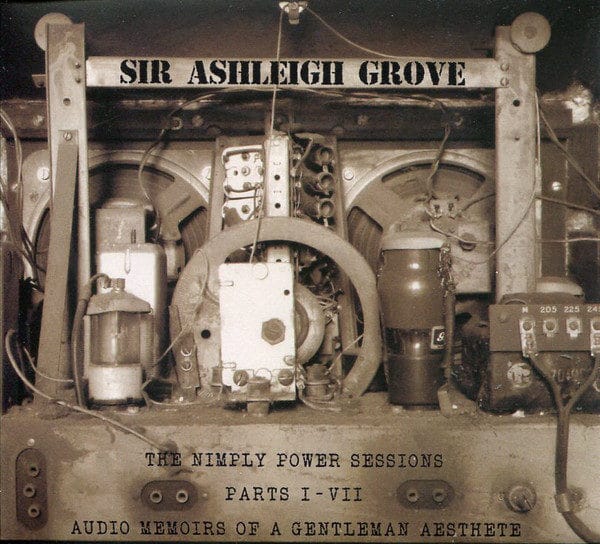 Until now, Sir Ashleigh Grove has been shrouded in mystery, having only appeared on a handful of legendary compilations on labels such as Broken Flag in the early-mid 80’s and having briefly collaborated with The New Blockaders before inexplicably disappearing without trace around 1984.
Sir Ashleigh’s work has been compared to other Power Electronics artists of that era, in particular Whitehouse, Sutcliffe Jugend and Ramleh (Sir Ashleigh, in a live collaboration with TNB, supported Whitehouse at their infamous live aktion at Morden Tower in Newcastle in 1983.) Although sonically such comparisons are quite accurate, Sir Ashleigh differed from other such artists in that he had little interest in Nazism, nor did he have a fascination with serial killers or The Marquis de Sade, much preferring the works of Edgar Allan Poe, H.P. Lovecraft and Sir Arthur Conan Doyle. Also, unlike his contemporaries, Sir Ashleigh eschewed working with conventional instruments (such as synthesizers, much favoured by virtually every PE band), preferring to cobble together whatever electronics he could acquire – old valve radio sets, malfunctioning fx pedals and even a metal detector!
Apart from a few tracks on various compilations, until now Sir Ashleigh’s recordings have been gathering dust in his personal library. Due to a deterioration of the original reel-to-reel and cassette tapes, the sound quality is rather lo-fi and can’t be compared to today’s near-perfect digital audio standards. However, these tracks can be considered to be previously missing gems in the history of UK Industrial music / Power Electronics.
Audio restoration and mastering was done by Phil Julian in 2015, and the CD is packaged in gatefold paper sleeve with an insert card including a complete SAG discography.