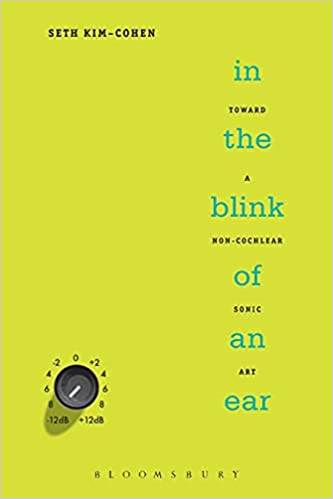 “In the blink of an ear”

“Seth Kim-Cohen works at the nexus of conceptualism and sound. An academic and an artist, he makes as little distinction between the two activities as he can get away with. He has taught art history at Yale University and Pratt Institute and presented his artwork at venues spanning the cultural spectrum from CBGBs to Tate Modern. His writing has been published in magazines, newspapers, and journals in the Europe, the U.K. and the U.S. His previous book, One Reason To Live, was published in 2006 by Errant Bodies press. More at www.kim-cohen.com. Polemical, revisionist, prescriptive: In The Blink of an Ear argues for a reassessment of the short history of sound art, rejecting the tendency toward sound-in-itself in favour of a reading of sound’s expanded situation and its uncontainable textuality. It has been nearly a century since Marcel Duchamp famously proposed a ‘non-retinal’ visual art, rejecting judgments of taste and beauty. In The Blink of an Ear asks why the sonic arts did not experience a parallel turn toward a non-cochlear sonic art, imagined as both a response and a complement to Duchamp’s conceptualism. Rather than treat sound art as an artistic practice unto itself, or as the unwanted child of music, In The Blink of an Ear relates the post-War sonic arts to contemporaneous movements in the gallery arts. Key ideas from art history,poststructuralism and deconstruction are leveraged to suggest that the sonic arts have been subject to the same cultural pressures that have shaped the most important post-war movements in the gallery arts: Minimalism, conceptualism, appropriation and relational aesthetics. Sonic practice and theory have downplayed – or, in many cases, completely rejected – the de-formalization of the artwork and its simultaneous animation in the conceptual realm. John Cage and Pierre Schaeffer’s predilection for sound-in-itself fuses Greenbergian media-specificity with a phenomenological emphasis on perception, and this tendency has established itself as the dominant paradigm for the production and reception of sound art. In The Blink of an Ear dismantles this history, excavating the conceptual implications of important instances of the sonic arts of the past six decades, and establishing the principles for contemporary non-cochlear sonic practice.
Embracing the inevitable interaction of sound with the social, the linguistic, the philosophical, the political and the technological, In The Blink of an Ear announces a turning point in the theorization of the sonic arts.”