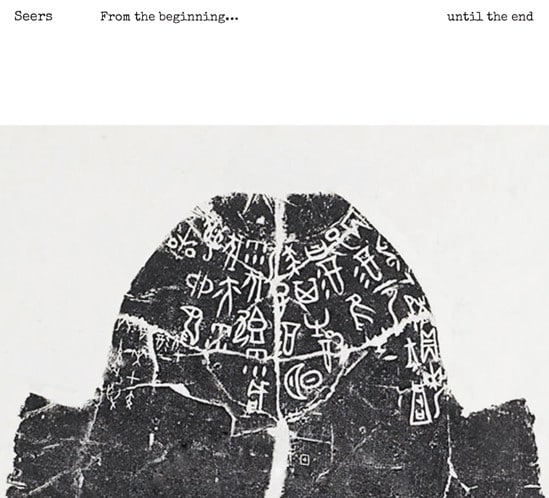 “From the beginning... until the end”

In 2004-2005 Pete Swanson and Gerritt Wittmer formed the group Seers in Oakland, California. They played a handful of shows (including at the famed Il Corral in Los Angeles) and recorded several studio sessions.
This work was planned to be released on a now-defunct imprint and was shelved following the labels dissolve. Despite the passing of several years, the value of this collaborative work has endured. Destined to undergo a journey and be resurrected on the other side. An exercise in time, challenging communication and the transfer of energy. Seers literally and intentionally incorporated the ability to “transfer energy” during improvisations via developing instrumentation that allowed one player to influence the other’s sound through direct routing. Much of the music is built on various feedback loops and other chains of chance. This is tape music, this is drone music, this is psychic music, this is spiritual music. Like the sound of the universe, undulating and folding unto itself, filled with transference and decadent illusion.
Here now in its original entirety is Seers “From the beginning… until the End.”
100 copies of the album will include a bonus disc “Live Testament”, recorded at Il Corral, Los Angeles by Damion Romero.
Gerritt Wittmer is a sound and performance artist based in Oakland, California. He is in the band Names and curates the Misanthropic Agenda imprint.
Pete Swanson is a musician currently based in Brooklyn, New York. His most recent work includes “Punk Authority” on Software and “Man With Potential” and “Pro Style” on Type Records, which all vaguely resemble severely corroded dance music. He was formerly a member of the psychedelic noise/drone act Yellow Swans.