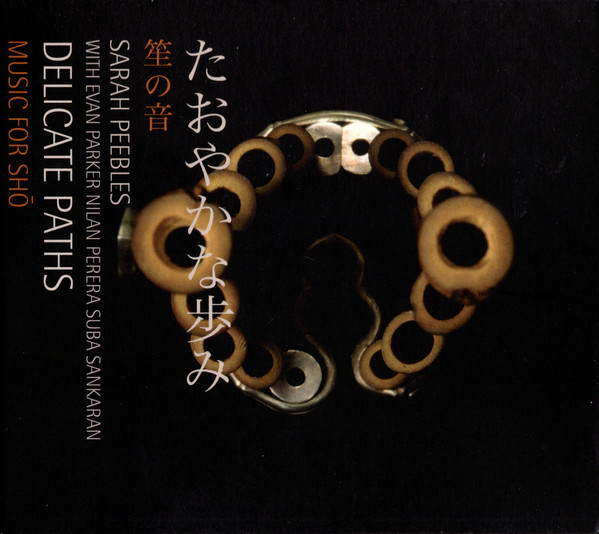 Music for shô by Sarah Peebles with Evan Parker Nilan Perera Suba Sankaran.“In the 80s, while I was studying music composition in Japan, I was intrigued by the seemingly esoteric role some traditional musics played in contemporary Japanese society. I was given the opportunity to study the shô-the mouth-organ used in gagaku, ancient Japanese court orchestral music and dances-at a small Tokyo shrine, Sendagaya Ward’s Hatonomori Hachiman Jinja. Via this shrine I became familiar with basic gagaku repertoire and played for Shinto ceremonies, weddings and related functions, and also learned how to tune and repair the instrument. From that time onward I’ve explored improvising with, writing for and toying with the acoustic, amplified and reproduced sound of the shô. I’ve often wondered who thought up this remarkable work of nature-meets-technology-this instrument, so elegant and deceptively simple-looking, which sounds so ethereal. The answer, of course, isn’t really who, but by which paths the shô has come into being.
The shô, a free-reed instrument, was introduced to Japan from China between 710-794 AD, and is one of a large family of Asian mouth-organs developed before and since that period. It has traditionally been played in Japan as a part of gagaku for court, temple and shrine functions. Contemporary compositions and improvisation have become a part of its repertoire since the 1960s, and its arresting pipe-organ sound has drawn fans from around the world. Asian mouth- organs likely originated in what is now Laos more than 3,000 years ago. They reflect an intriguing, synergistic relationship between human beings and the habitats surrounding us. Since ancient times, mouth-organs have utilized the nest materials of wild stingless honey bees (such as genus Trigona in Laos): honey-making bees in tropical regions that are cousins of stinging honey bees (genus Apis). The stingless bees that forest peoples of the tropics have used throughout the world are social bees that gather plant resins and produce mixtures of secreted wax and these collected resins (as well as plant gums, oils and other substances), which the bees combine equally and use within their nest as construction material. Indigenous peoples have gathered these materials from wild nests for millennia-often boiling down components and mixing them in specific proportions-and applied them to mouth-organs in many ways, as well as to many other cultural items.
Ecology and human culture intersected in new ways as bee husbandry and agriculture progressed in ancient Asia. The mouth organ that became the shô utilized wax from managed bees-eventually from Japanese honey bees, Apis cerana japonica, a subspecies of the Asiatic honey bee-along with human-gathered resin, ground malachite, lead, bronze, lacquered wood, buffalo horn, silver, and smoke-cured bamboo from the hearths of old houses. It has changed little since arriving in Japan, except for the occasional experiment.” Sarah Peebles, Toronto, 2014