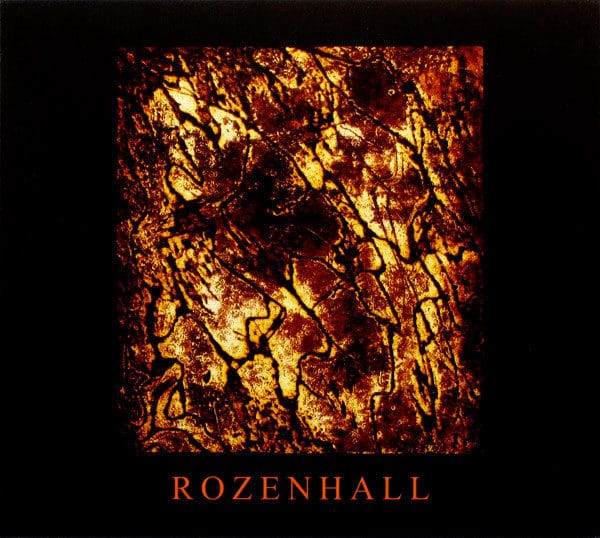 Back in stock. Tracks 1-3 were originally released on the LP Eyeland (Firework Edition Records, FER 1042) in 2003. Tracks 4-5 were originally released on the LP Miasmasun (Firework Edition Records, FER 1032) in 2001. All tracks were digitally re-mastered in 2007 for this CD edition. All music by Daniel Rozenhall. Recorded at EMS, Stockholm. Cover and insert artwork by Rozenhall. Graphic design by Rozenhall and Sten Backman. “Time is an illusion. Nature consists of rhythms, pulses and the eruptive life wills of the organisms. And there is something unremittingly organic – or to be more exact bacteriological – about Rozenhall’s soundscapes. They demand their own lebensraum and squeeze themselves up between the dials on the mixing board. Sounds that have gone astray. In perpetual motion. A process without hiatus. Bacteriological objects forcing themselves upon us from the eye of the hurricane, while everything around us is twisted out of joint – time, space and the whole show. We contemplate but we aren’t able to interact. The body loses power over its movements and the world is transformed into flickering light. Yes, if we promptly need to speak of Rozenhall’s music, then we have to speak of the sounds between the frequencies, between the fingers, between the words, beyond the patterns. Where every nerve ending is revealed. Millions and millions of details. A rhythm without tonality. A music of negations. And our conversation cannot be anything else but the excretions that are left behind after the descriptive attempts have been halted – the waste product of sounds. Try to lie still to this. Rozenhall unveils your couchpotatin’ for what it is: an imagined resting place on a globe of galactic driftwood. Rozenhall’s music has nothing to do with greeting phrases. This is the way a farewell sounds. To part is to begin again with oneself. The last handshake that allows thought to return to one’s own drawing board. Rozenhall has created the ultimate soundtrack for this swiftly passing ground zero. When you without help from anyone else have to confront the vertigo within yourself. The dizziness that happens before you have caught up with your own autobiography and the private mythmaking that allows you to return to your ordinary habits. And the first thing you meet is the treble. The shrill tone that is allowed to radiate into every cavity. Impossible to figure out like a rubik’s cube without a solution. A sound wave from an alpine landscape, deserted and windswept. It’s like if The Overlook Hotel in Stanley Kubricks’s ‘The Shining’ started sending out its own emotional state through a forgotten radio channel. And it is our fate to lay frostbitten with our axes raised for attack in the garden labyrinth.” Daniel Westerlund