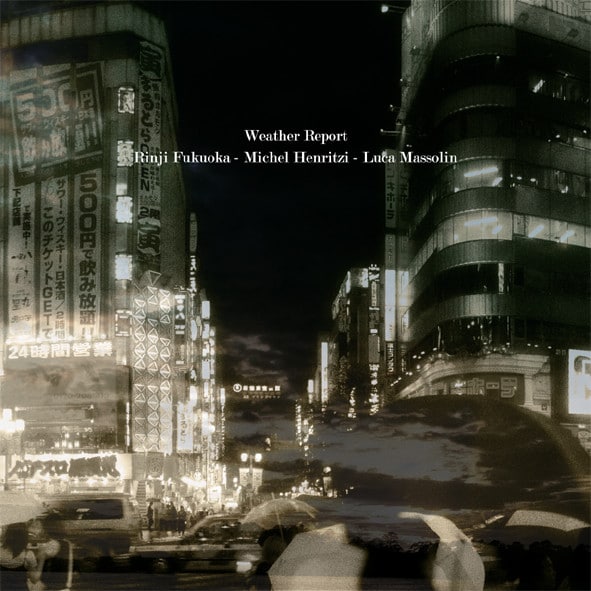 “Light on a wall”

Backwards is proud to announce a mind-blowing album of cosmic improvisation by the trio of musician / producer Luca Massolin (Golden Cup, Golden Jooklo Age), French avant-garde guitarist Michel Henritzi and Rinji Fukuoka, formely member of Overhang Party and currently of Majutsu No Niwa.
Recorded in November 2011, eight months after the Fukushima disaster, ‘Weather Report’ is an onirical yet political soundpiece, developed in two long movements, ‘A Chuva Obrigado’ and ‘Radioactive Arigato’.
The first side is a cornucopia of ghostly shapes and haunted tones, with Massolin’s dreamy organ and heavenly electronics blessed by Fukuoka’s elegiac violin lines. The piece evolves soon into an improvised blues for flamenco-like guitar (!!!), percussions and abstract electronics, building up tension until Henritzi’s lapsteel joins with waves of ectoplasmic electricity, and finally exploding into a blast of cathartic free noise.
The other side is when the piece starts vibrating, with Massolin’s electric bass pushing the whole thing into full-on shoegaze mode, Henritzi combining long, doomy drones and Fukuoka playing the most emotionally violin ragas you got to hear in an improvised studio album. There will be room for more ghosts until the end of this side, taking us to a landscape of wintry trees, empty streets, an abandoned city devoid of human presence.
This is the soundtrack of an echological disaster, a picture taken right after it happened, a warn about the risks of pushing the limits of human technology against nature. Images translated into sounds by improvised free music in its purest form: evocative, political, magical. How can you not be affected?
Limited edition of 300 copies.