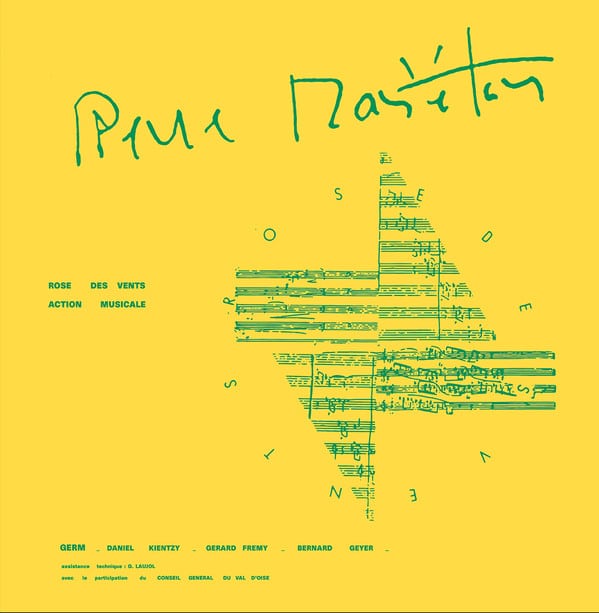 2 x 140g Vinyl LP, housed in a matte reverse-board gatefold sleeve with offset printing in an edition of 500. Vinyl mastered and cut by CGB at Dubplates and Mastering in Berlin. 16-page A5 risograph insert, with introduction and photography by Andrea Zarza, and a commissioned text in French and English by Pierre Mariétan. Insert designed by Matthew Kent and Gustavo Eandi and printed by Hato Press in London. This re-edition includes a track-listing – found in the inlay of the gatefold sleeve – based on sequenced announcements throughout the recording.

First commissioned by the French Government in 1981, the LP Rose Des Vents. Action Musicale evolved out of a six year project by Swiss composer Pierre Mariétan to document and musicalise the sound environment of urban landscapes within France, creating an inter-geographical auditory map of cities and townships located in the suburban reaches of Paris, including Bezons, Herblay, Montmagny and l’Isle Adam.
Through a mix of field recording, interviews, vegetable market catcalls, braying animals and urban hubbub, Mariétan paints a broad, psycho-acoustically vivid and decentralised profile of metropolitan life from the period; carried to the ear through a coupling with musical studio performance and serialist compositional technique. Over an hour and forty minutes, the recording provides an intersectional and ambient passage through environmental and urban narratives, the radiophonic voice of Ana de Carvalho offering fleeting, poetic orientation with announcements of each titled scene, divining and evoking the sonorous qualities of each landscape as it comes into focus. Each scene tangible yet non-specific, the artist arranging and signalling the possibility of civic and pastoral space as a musical container for spontaneous, sonorous interactions.
Mariétan’s profile is of a rigorous yet open and exploratory composer, utilising principles of chance and curiosity in organising found sound and often negotiating or encouraging encounters with improvisatory gesture or incidental and occurring sound. In 1966 he established the outfit GERM, grouping composers and musicians dedicated to developing new meeting points between composition and improvisation. Members assist in contributing recordings and performances throughout Rose Des Vents, including musical passages on piano, synthesizer, horn and saxophone. These studio pieces, played on saxophone by Daniel Kientzy or piano by Gerard Fremy, recall and redeploy techniques developed over the lifespan of the project, where site specific actions and concerts were performed within each of the towns.
In many ways, the album is a folding of each facet of the author’s life and work into a single representative culmination. A sympathy towards radiophonic or documentary production values is recognisable—Mariétan produced two iterations of Rose Des Vents. Action Musicale for Alain Trutat and Jean Tardieu’s ground-breaking Atelier De Création Radiophonique on Radio France Culture ahead of this LP release—alongside the influence of his work in urban acoustics and research into forms of sound ecology. So too is the obvious pleasure taken in introducing the sweetness of music to children, with notable samples from his educational workshops and sound installations helping to internalise and evoke a sense of inquisitive delight.
It’s these components, combined with themes and concerns about the acoustic environment that resonate 30 years later and establish Rose Des Vents as such an approachable, listenable and lovely piece of experimental sound art. The conjuration of an emotional or psychological plane through musical and metaphorical synthesis allows the listener to situate themselves within the montage in a near cinematic manner, discovering an underlying sonority embedded in the psychic atmospheres of communal life.