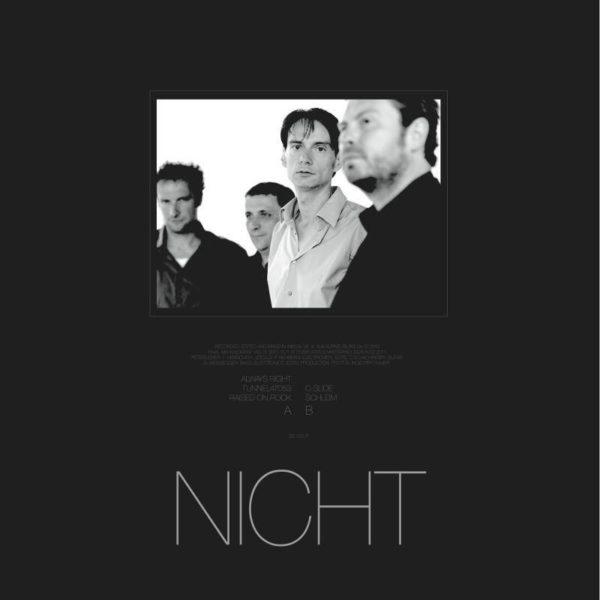 “Recorded, edited and mixed in Wien III, VIII, IX, XI & Korneuburg, Austria 04-12.2010. Final Mix in Komitat Vas, Hungary 01.2011. Cut at Dubplates & Mastering 02.2011. F. Hergovich: Vocals. P. Rehberg: Electronics, Edits. C. Schachinger: Guitar. G. Weissegger: Bass, Electronics, Edits, Production. Photos: Ingo Pertramer. Layout: Stephen O’Malley. Well, here it is! The moment you have all been waiting for…. the arrival of the debut album release by Peterlicker. Despite following on in that terrible tradition of Butthole Surfers and Throbbing Gristle of stupid band names, Peterlicker (newly reformed after 20 years of inactivity) have, against all odds, come up with a serious slab of modern electronic rock. Nicht comprises of five well crafted selections recorded over the summer of 2010. Having got their previous noise free fall style out of their system on the limited cassette “Last Slave” (DeMEGO 013), the forgotten sons of the Viennese underground have stepped, dare we say it, into almost accessible song like structures. However, this is no lightweights wet dream, and still pulls some heavy punches. With the sequenced pulse of “Always Right’ sitting tight with the near poetic “Tunnel 47053”, the real-rock stomper of “C-Slide”, and not forgetting the manic psychedelia of “Schleim”. Its a classic, basically. Edition of 500.” label info