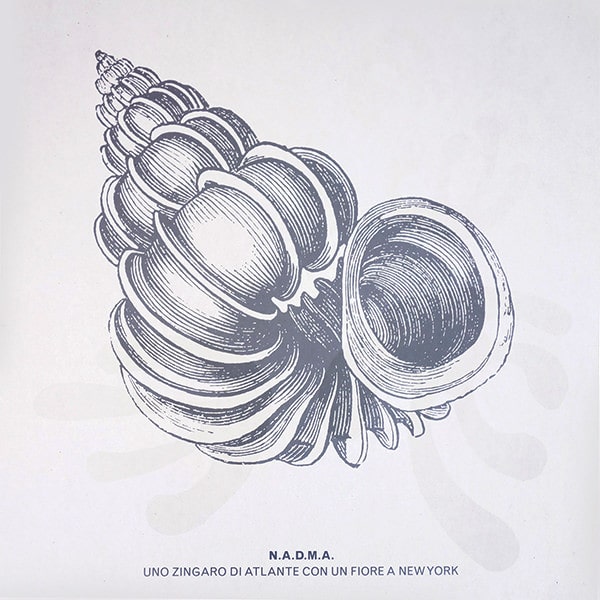 It’s an incredible moment for the legacies of Italy’s sonic avant-garde – particular those springing from the social, political, and creative ferment of the 1960’s, 70’s, and 80’s. Long neglected and overlooked, the last year has witnessed a remarkable stream of reissues, illuminating the movement’s towering heights and diversity – it’s wild, democratic spirit, adventurousness, and rigorous integrity. Following on the back of their incredibly ambitious five LP Gruppo di Improvvisazione Nuova Consonanza box set, Die Schachtel returns – pushing toward unknown realms with a reissue of Uno Zingaro Di Atlante Con Un Fiore A New York, the almost completely overlooked LP by N.A.D.M.A (Natural Arkestra Da Maya Alta), originally issued in 1973.
Comprised of Davide Mosconi, Franco Pardi, Gustavo Bonora, Inez Klok, Marco Cristofolini, Marino Vismara, Mino Ceretti, Otto Davis Corrado, and Talia Toni Marcus, within the history of the Italian avant-garde, N.A.D.M.A is as obscure as they come. Mosconi later came to note as a solo artist and photographer, and Pardi and Vismara within the worlds of visual arts, but beyond a scattering of releases, Uno Zingaro Di Atlante Con Un Fiore A New York is the lone document to have surfaced from most of its contributors. Details surrounding the band and the record are incredible scarce. Despite the mystery, with hindsight, they rise as an unquestionably definitive gesture of the movement to which they belonged.
The Italian avant-garde is among the most rigorously democratic of any of the movements within 20th century sound. It a melting pot – each gesture unique and independent, while drawing heavily from a broad range of cultural sources and sonic traditions. Like their more well know peers in Aktuala, N.A.D.M.A grew from this spirit, but realized it in far more radical forms. They are among the wildest of those connected to the movements of free-improvisation and jazz. The group’s lone 1970’s release, Uno Zingaro Di Atlante Con Un Fiore A New York, is unlike anything else of its day. Soulful as hell, it blends a remarkable range of instrumentation and cross-cultural reference – a wild imagining of the potentialities of modal folk traditions, gathered in the writhing aggressive form of free-jazz. It is an album so remarkable and striking – among the greatest and most accomplished European efforts within the form, that there is no explanation for why it has remained so unacknowledged through the years. As honest, emotive, and creatively inspiring as anything of its day, it is a towering, bubbling, brilliant achievement in sound – as though everything that is wonderful about avant-garde music met for a startling moment, before drifting away. Uno Zingaro Di Atlante Con Un Fiore A New York is among the greatest documents of Italian music, and among the most important within the canon of European free-jazz. Presented with the love and care for which Die Schachtel has become known, limited to 500 copies in a brand new visual presentation, this marks the first vinyl reissue of this masterpiece, since its original release in 1973.
As seminal as they come. Not to be missed on any count.
Edition: 500 copies