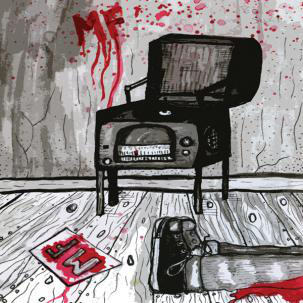 While our erstwhile maestro is likely to point out personal involvement in Miami’s Broken Talent or Trash Monkeys as the apex of his twisted musical endeavors, the fact remains that Mark Feehan is most likely best remembered as the “other” cold-blooded string-mangler that shredded synapses through the Siltbreeze era of Harry Pussy two decades ago. While recent years have seen former bandmate Bill Orcutt reinvent the essence of gut-bucket blues, Feehan whiled away the time building an exact replica of an infamous Confederate submarine (the H.L. Hunley) and traveling the world, submerged. During that tenure nestled in Neptune’s realm, he created a masterful album of his own – this very collection bearing his humble monogram. MF is a lively mix of guitar-based compositions steeped in modal harmonics that explode into miasmic, aural waves, transporting emanations of Phil Yost, Magical Power Mako, Michael Chapman and Hans Reichel into the mind stream. Swirling, spacey eddies will open like maelstroms and flood your subconscious, but do not be afraid. That much time under water changes a man. But sometimes it’s for the best. And MF is a case in point. Limited edition of 350 copies.