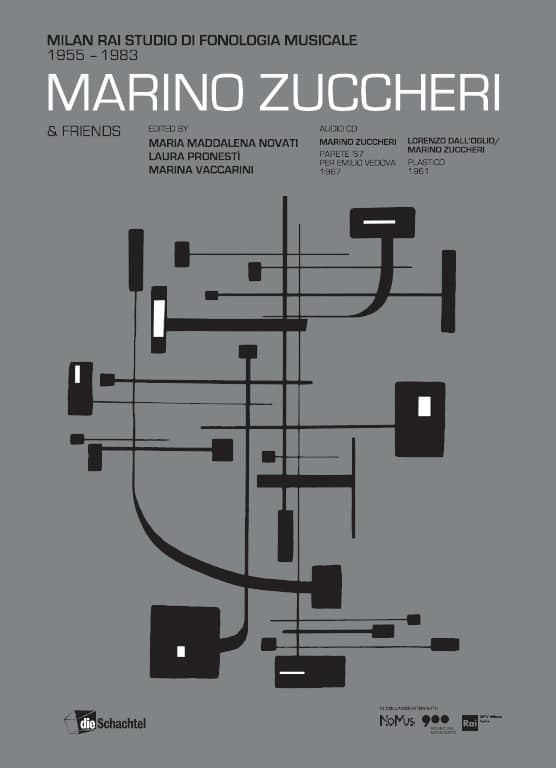 The “regular” Book+CD edition of 400: 160-page book (17x24cm) + CD. Silver cover with flaps – English only. The CD includes “Parete 67” plus the inedIt piece “Plastico”.In the world of artifacts, there are the known, the unknown, the forgotten, and the lost. An artefact may pass easily between the four, entirely at the mercy of the care it is offered, or which finds along the way. The music in question – Marino Zuccheri’s Parete 1967 Per Emilio Vedova, an massive electronic composition created by the multi-talented engineer of the famous Milan RAI Studio of Phonology for the Italian Pavillion at the Montreal Expo ’67, is one such case.It began as part of something known – a wild, sonic public event, was almost entirely forgotten, becoming lost and then unknown. It wasn’t until 2005, when these recordings entered the orbit of Die Schachtel, that anyone had been able to hear them since they were made in 1967, offering their world premiere. As is often the case, the limited edition LP quickly sold out and drifted from view. Finally, after more than a decade long wait, Die Schachtel has wondrously pressed it again, allowing its beautiful challenges to reenter the world. this is more than a “simple” LP edition, as often happens with the Die Schachtel imprint. In 2017 the Milan Museum of 20th Century produced an exhibition and a series of seminars and concerts dedicated to the figure of Marino Zuccheri and his experience at the Rai Studio di Fonologia, where he spent his entire working life, from 1955 to 1983 (the Studio would be closed in 1986). That gaves the Milanese imprint – which was one of the partners of the ehibition – a wealth of material that eventually found its way in a splendid book, aptly named Marino Zuccheri (and Friends) – Milan RAI Studio di Fonologia 1955-1983 – that includes a large selection of Zuccheri’s graphic designs, as a testimony to his multifaceted artistic personality, as well as concert diagrams, buiding schemes of the electronic machineries, inedit documents and photos, and much more. The enclosed CD features the pieces “Parete 67” and the inedt “pLastico” from 1961, Zuccheri first electronic piece ever.The rest was history, even if that history became lost. In conjunction with Vedova’s installation of glass slides, reproducing his abstract images as projections on the asymmetrical walls of the Pavilion, Zuccheri generated a spectacular and intense 30-minutes loop of pure and intense electronics, a magnetic cascade of harsh sounds and deep drones. By all accounts, it was stunning counterpart to the harsh and expressionistic painting of Emilio Vedova, before both drifted from view.Parete 1967 Per Emilio Vedova is one of the great artifacts of 1960’s Italian avant-garde – a wild, grinding metallic expose which sucks the ear into its depths, made, like so much of the best work of the era, in the spirit of collaboration and the meeting of two minds. Die Schachtel’s edition is the realisation of a life long dream of Marino Zuccheri’s to see this recordings issued. Pulled from the original tapes in his archive, and working closely with him before his death in 2005. A true wonder of towering historical importance. As essential as it gets for any fan of experimental music, or the history of the Italian avant-garde.