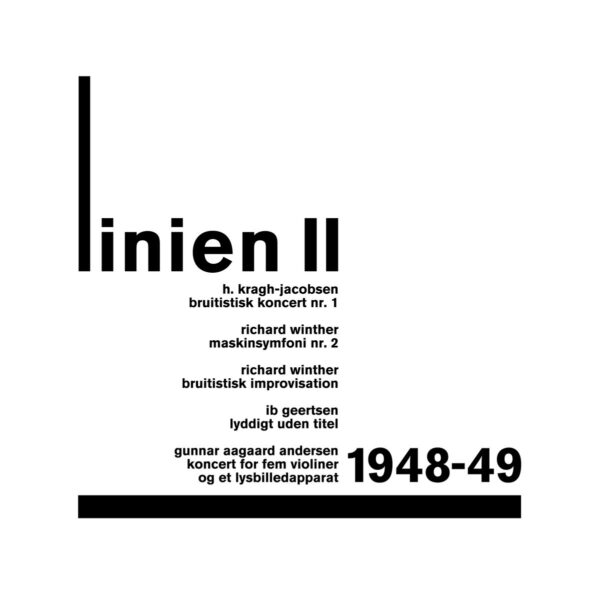 The story of Linien II’s sound experiments is a story about how a handful of young, idealistic, self-aggrandizing and silly Danish artist dandies in 1948 by a detour invented their own concrete sound art, almost exactly at the same time as radio technician and composer Pierre Schaeffer worked on developing his musique concréte in Paris – and even presented their concrete sound works to the public at an exhibition in Copenhagen before Schaeffer’s first and landmark musique concréte work ‘Cinq études de bruits’ was premiered on French radio.

The release presents five experimental sound works that in different ways represent the artists’ attempts at finding new solutions to a set of formal aesthetic concerns in relation to concrete art by transposing them into the medium of sound. It is a story that hasn’t been told before, as the works until now have only existed in two sets of copies on the original fragile lacquer records, both of which have been locked deep inside museum archives. Now the historical sound works can finally be heard when the Institute for Danish Sound Archeology are releasing them on LP almost 75 years after their recording.

Accompanying the release, a comprehensive art historical text knits together the story about the creation and context of the experimental sound works.