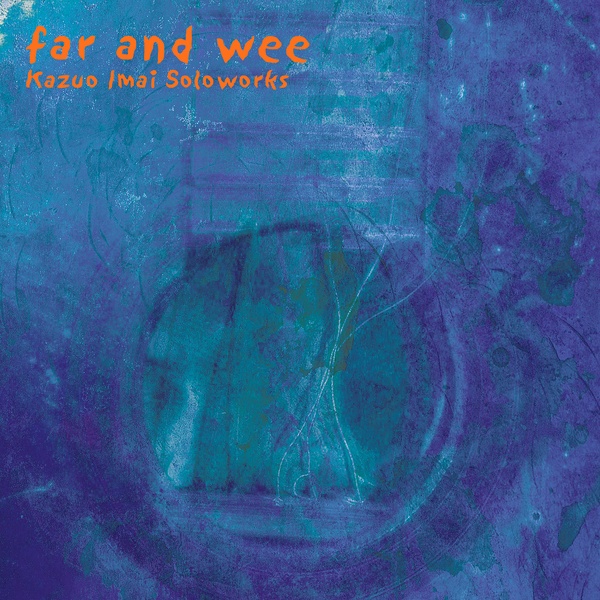 Black Editions present a reissue of Kazuo Imai’s far and wee, originally released in 2004. Kazuo Imai is one of the few artists to traverse both Japan’s early avant-garde and free jazz movements. Though he began performing in the 1970s, his 2004 P.S.F. album far and wee was only the second under his name. In a series of thrilling acoustic guitar improvisations — Imai’s playing crackles with dynamic tension and physicality as well as a subtlety and nuance that reveals him as one of the instrument’s true masters and innovators. In 2004, Kazuo Imai (Marginal Consort, East Bionic Symphonia) recorded a series of nylon-string classical guitar improvisations at the request of P.S.F. founder Hideo Ikeezumi. far and wee, the resulting album, vibrates with the inherent duality of nylon: the strings stretch and snap back like rubber tautened and released, and paint the softest of caresses in silky washes. Imai was a student of two of the foundational artists of the Japanese avant-garde: Masayuki Takayanagi, the pioneering free-improvising guitarist and Takehisa Kosugi, the visionary Fluxus composer also known for his work with Group Ongaku and the Taj Mahal Travelers. A sense of inquisitiveness about how far he can push himself and every part of the guitar pervades these performances as Imai makes everything from the pegs to the bridge to the strap pin explode with resonate. For over 20 years, Imai has been a driving force behind Marginal Consort a collective of Japanese avant-garde musicians devoted to collective improvisation, known for their incredibly layered and varied annual performances that last for three continuous hours. Using a blend of homemade and traditional instruments, electronics, and sculptural and natural forms, they create auditory experiences of exceptionally unique color and vibration. The same dedication to vitality and variety is found in Imai’s guitar music, and it is via the guitar that his vast studies in philosophy and music come together in extreme focus, allowing him to tease and extend the history of the instrument while interrogating the limits of its edge. far and wee continues the tradition of the Soloworks concerts that Imai has been giving for several decades, and allows the listener to breathe in the unique space of Imai’s thought processes. He attacks the instrument: the nylon strings explode against the guitar. And he caresses it, soothing each centimeter of string with delicate force and concentration. Pressed to high quality vinyl at RTI. Heavy tip-on jackets; includes download.