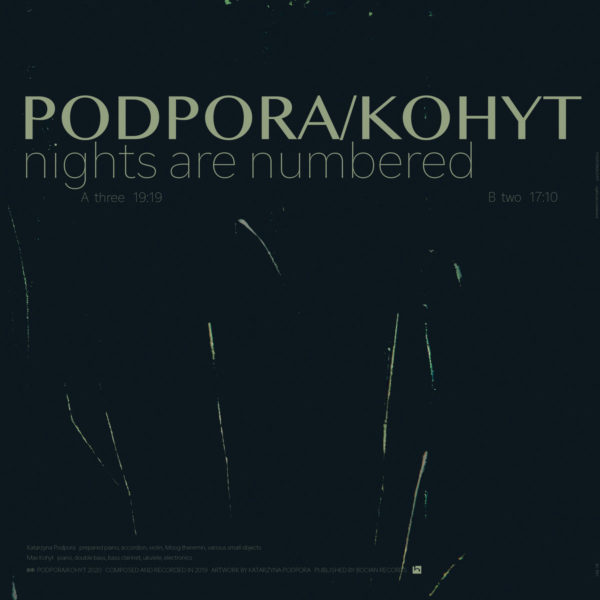 “Nights Are Numbered” forms a world of apparent, apocalyptic ambience and sounds which are produced mainly with conventional instruments such as double bass, grand piano or accordion however, located outside their classical use, but also with some contrasting, organic and archetypal sounds of objects, such as bones or dried plants, amplified in studio conditions. This specific accord of dissonances coming from various sources shifts the listener into the realm of sonoric experiment, achieving even a certain level of grotesque in the finale.

Careful listeners may hear in this music echoes of creations by such artists as Agog, Animist Orchestra or Polish sonorism of the late nineteen-sixties; as well as parts influenced by works of great composers such as Witold Szalonek and Zygmunt Krauze.
Within the whole artistic activity of the Podpora/Kohyt duet – live performances as well as studio recordings – there aren’t references to just one part of musical tradition, which becomes apparent when listening to another release published on their bandcamp (“Chapel Music”), and coming back to this one after having listened to their Bocian LP; or – in the future, when it becomes possible – going to one of their concerts.
These two were released within a period of maybe a dozen months! This shows the wide range of means, the artists’ imagination, great determination, charisma as well as creative passion standing behind the rich, meticulously recorded studio session “Nights Are Numbered” and the crude, almost primitive, lo fi production – “Chapel Music” – somewhat reverse to the nearly sterile studio recording for the LP.