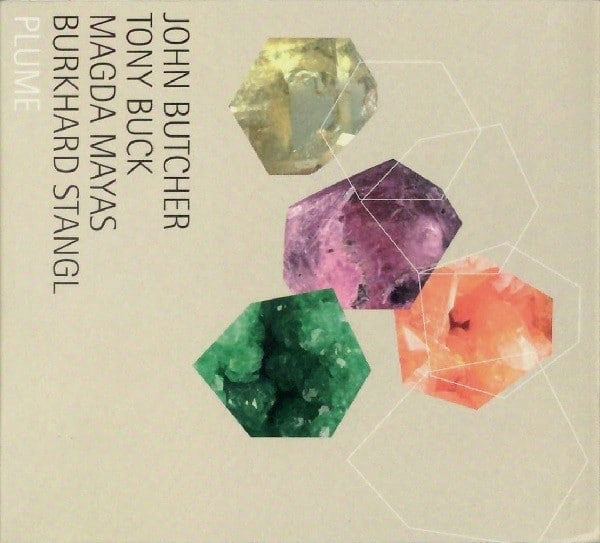 1. John Butcher (saxophones), Tony Buck (drums and percussion), Burkhard Stangl (guitar) live in 2007 at the LMC Festival.
2. John Butcher (saxophones), Tony Buck (drums and percussion), Magda Mayas (piano) in 2011 at the Freedom of the City Festival.
‘I find the most creative situation for improvising is with musicians with whom you’ve built up a relationship over many years, but with whom you don’t play together too often. You do have a shared history to work from, but each time you meet you also bring something new from your separate experiences since last you played.’ (John Butcher)
These two high profile trios are all inventiveness, and this is reflected in the way they were formed, as much as in the music itself. There is a tangled web of connections at play between the four improvisers, through a history of past collaborations, one to one or in larger formations, some occasional, some more structural; the trios on this CD were chosen for their potential, for the notknowing
as much as the knowing, and that’s what we hear; accomplished and profoundly involved music in the making, pushed forward by an ever renewed and intense ability to connect.
Review of Buck/Butcher/Stangl at London Musicians’ Collective’s 16th Annual Festival of Experimental Music : “… The trio’s music had vitality and a sense of purpose. It took improvisatory risks, displayed individual virtuosity and collective
alertness. It was genuinely exciting and it sounded really good. Buck is a wonderfully oblique energiser, relentlessly attending to texture and percussive colour as he generates momentum. Stangl’s clenched or splintered chords, pedal-swell and dramatic attack proved a great foil for Butcher’s intensity, inventiveness and cliche-free expression. Was this ‘experimental’? Well, it had life, and in the arts that’s often what that term has essentially meant, in opposition to reified forms, commodification or mindless repetition.” the Wire – Julian Cowley.