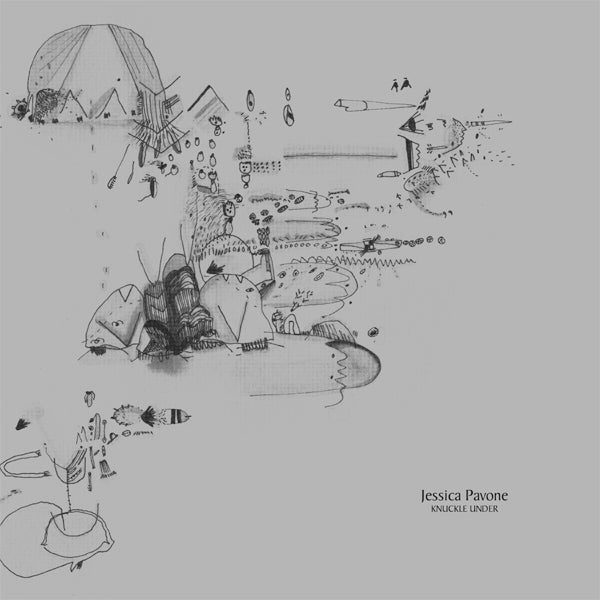 “Violist Jessica Pavone’s Knuckle Under is the result of an exercise in mono focus, the result of a medically enforced hiatus from playing her primary instrument. She returned to the viola after a 21 month lay-off determined to play only the sounds she most wanted to hear. That turned out to be long tones, often played with such force that one imagines a puff of rosin rising from her strings as she bowed them. “ , But Not Here” gets through just three rustic sounding notes before a delay unit sprays one out like a prism. She repeats the phrase, and another note splits and gets trapped in an effects pedal’s hall of mirrors.
The simplicity and sheer noisiness of the music feels remote from the scrupulous craftsmanship exhibited on her last solo record, Hope Dawson Is Missing, even though they share a tune. “Plutonium”, the piece in common, reveals the flexibility that Pavone finds in folk material.  On the Tzadik disc, it unfolds into a stately art song; here, mournful low tones turn as bushy as a wolf’s winter coat under the influence of amplification. Pavone is, as ever, scrupulously focused, wringing everything she can from one piece of material before moving on.” Bill Meyer, The Wire, Issue 368.
Knuckle Under is Pavone’s first recording to be released on vinyl. Mastered by James Plotkin, cut direct to metal and pressed on 200g virgin vinyl in an edition of 300. The jacket was letterpress printed, diecut and hand-assembled at Studio on Fire in Minneapolis.