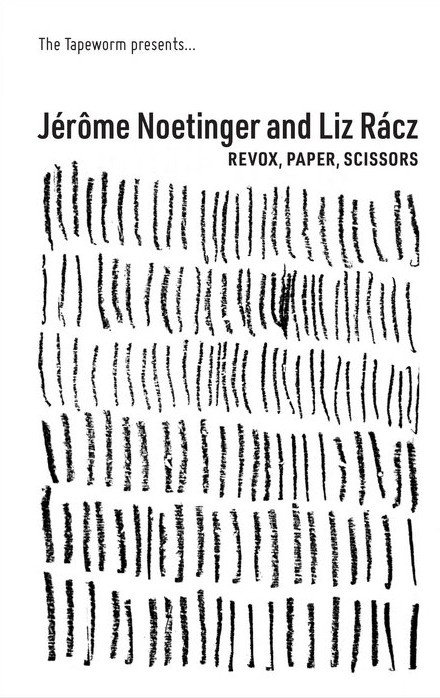 Using a singular repetitive gesture, Liz Rácz draws on a 10 metre-long roll of paper that she gradually unfurls, revealing a mass of regular strokes.
Jérôme Noetinger records this gesture on magnetic tape, capturing, repeating, and transforming it.
An auscultation of detail in the continuum of a magnetic tape loop.

Jérôme Noetinger
Jérôme Noetinger is a composer, improviser and sound artist who works with electroacoustic devices such as the Revox B77 reel-to-reel tape recorder and magnetic tape, analogue synthesisers, mixing desks, speakers, microphones, various electronic household/everyday objects and home-made electronica.
He performs both solo and in ensembles (Cellule d’Intervention Metamkine, Le Un, Hrundi Bakshi, Les Sirènes, Proton…), and collaborates often (Sophie Agnel, Lionel Marchetti, Aude Romary, Angelica Castello, Antoine Chessex, Anthony Pateras, Anne-Laure Pigache…).
From 1987 to 2018, he was the director of Metamkine, a non-profit organisation dedicated to the distribution of improvised and electroacoustic music.
Between 1987 and 2014 Jérôme was a member of the editorial committee of the quarterly journal of contemporary sound, poetry and performance, Revue & Corrigée.
For ten years from 1989, he was a member and programming co-ordinator of exhibitions, gigs, and experimental cinema at le 102 rue d’Alembert, Grenoble.

Liz Rácz
Originally from Melbourne, Australia, now based in the Grenoble region in France since 2009, Liz Rácz is an artist working across different media: installation, drawing, printmaking, painting, writing, comics, and performance. She interrogates perception, repetition, mise en abyme, gesture and translation, feedback and language modes through such works as La Persistence Reptilienne (2017) which is based on principles of pre-cinema optical toys, but animated by stroboscopic light; or project-in-progress Drawchestra (2019), a participative and auditive drawing event using home-made electronics and contact mics; and, in collaboration with Richard B., Furcsañata (2018), a noise performance smashable sculpture, filled with adult-themed goodies.
She is the vocalist in the punk group Plaine Crasse since 2018 and is also in the collective that organises gigs, Archipel Urbain, at le 102, Grenoble.