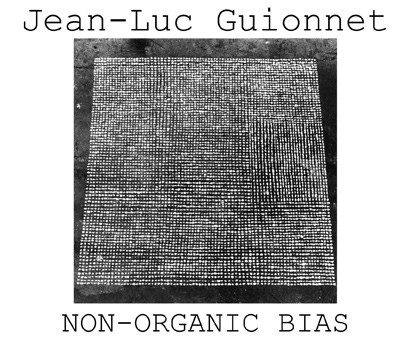 CD1: “Non-organic bias” (2003): “Two facts determined the compositional process of non-organic bias : 1 – the title itself. 2 – the sound sources used for the piece were restricted to various recordings I made of the organ. Other then the play of words that sum up many of my main points of interests with the organ (organ – organum – organism -organic -etc.), the title, bias, means prejudice, focussing on, interest in, systematic distortion, irregular shape, oblique course, predisposition, partiality, from the french biais, all of them signifiing for me a sort of base of living organism. Inclinations going through material, warped matter, a form full of inner slopes, a material that bends… non-organic bias : to rediscover the bias of a sound machine (the organ) and then, keeping the same concerns, following up these bias’ up until the membrane of the speaker, passing through the whole electroacoustic network. To compose with the technical issues, to be on the hunt for forms and artefacts that the techniques produce, when, following its own tendancies (bias), it is brought to its own limit : border effects, resonances, natural saturations… all artefacts that sign the acoustic, analogic, digital, process… To compose with the tendancies of the non-organic, and with the tendancies toward the non-organic : these are the two possible meanings of non-organic bias. “Non-organic bias” is dedicated to Franck Gourdien.” “Espace bas” (1995): “As if the wind were bringing us glimmers : sound is a light which scrapes. Documentary of nothing, music detached from the poetics of the source, i.e. from the nostalgia both of the cause and the spaces called real for the good of the cause: with “espace bas” (low space), I was playing at building, freely, almost mentally, the sound which escapes from below. Like seeking multiple fundamentals of background noise, ultimately managing to make do with noise without making noise – under the pretext of music: it seems that time outlines sounds like water outlines the forms of stones and everything in its path; but one could also say that, in so doing, time scrapes, makes noise in scraping, and involves other forms : forms of time. “Low space” is a false noise, a false music that, in bursts, pulls the bass continuum of passing sound to the edge of forms of time – as if being low amounted to being to come. Most of the sounds were recorded on the organ of the conservatory of Dieppe. “Espace bas” is dedicated to Caroline Pouzolles. Dieppe – 1995 – coproduction : « la grande fabrique ». CD2: “Estuaire”(2005): “Here is the thing as I tell it to myself… In the very middle of a sonic estuary, just under the surface of the sound : a head is turning around itself and feeling, in the thickness of the milieu, what happen “here” as well as “over there” (streams, river’s flow, banks, ocean, tides, …horizons). In the very middle that is to say where are “meeting” all the geographic signs. That idea came to me while playing organ, all the sounds are those of several organs I had a chance to play on during the past years (Parthenay, Paris, Metz, Saint-Loup-sur-Thouet, Annecy, …). “Estuaire” is dedicated to Giacomo Leopardi. Coproduction MIA – Annecy (2005) * Please note that the track order here are different from the cover, here is the correct playlist, we are sorry for the inconvenience.”