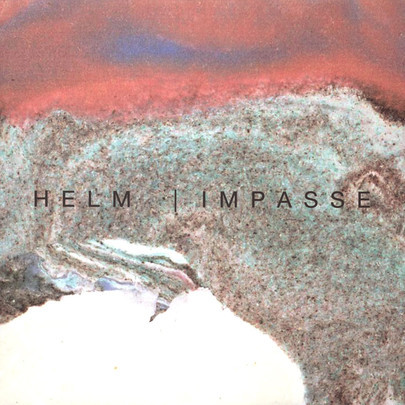 Impasse is a sideways journey into the archives of London based artist Luke Younger, aka Helm. Originally conceived six years ago in the wake of a Birds of Delay tour, an edited version of Impasse saw the light of day as a mini cdr on the low point label in 2008. This expanded re-issue has the two original tracks remastered along with two other pieces from the same sessions that remained unmixed and unreleased until a couple of years ago. Impasse is somewhat of an anomaly in the Helm canon when put alongside recent live performances and his work for labels like pan and kye. Where these explore the mystery inherent in obscure / everyday sounds, acoustic phenomena and mutated rhythm that results in an unusual urban experience, impasse is significantly brighter in tone.
Consisting of 4 loop based pieces the record moves into more fantastic worlds as electronics rise to the occasion, evoking similar atmospheres found in the work of Terry Riley and Boyd Rice’s early ambient works. Picture a functional family vacation, an explorer at the apex of his endeavours, a 4am drinking session with new liquids discovered. Bright corners, euphoric angles and ecstatic drones all appear in an emotionally charged high that reflects these unique moments in the human experience. The beauty of Helm lies in its implacable curiosity, the way his music observes the state of current being without sliding into the pitfalls of the general milieu. Impasse is another sublime offering from one of the uk’s sharpest cats. Limited edition LP with artwork by Graham Lambkin. Tracks remastered by Jacques Beloeil.