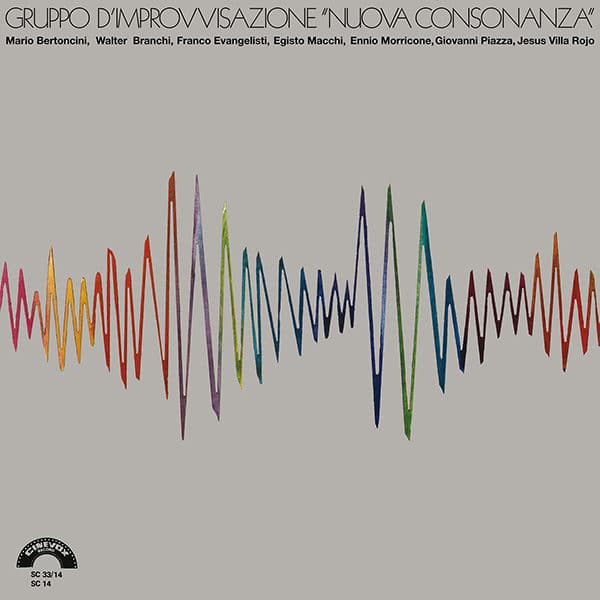 Edition of 400 copies, pressed on 180g black vinyl housed in its faithfully restored original packaging and newly remastered from the original reel-to-reel tapes. Includes an exclusive 30x30cm 12-page booklet with never seen before pictures and essays / texts which delve deep into the album, its story and its newly restored form.

When gazing over the expanse of 20th Century avant-garde music, few European projects can claim the seminal importance of the Gruppo di Improvvisazione Nuova Consonanza. Formed in Rome in 1964 and considered to be the first experimental composers collective, its membership included many of the most remarkable voices of its day: Franco Evangelisti, Ennio Morricone, Egisto Macchi, Roland Kayn, Frederic Rzewski, and many others.
Creatively radical, rawing on jazz, serialism, musique concrète, and extended techniques – breaking with the divisions that largely defined the global avant-garde scene, the Group sculpted a body of sound like nothing before or since. Deeply optimistic – deploying an open approach to hybridity of source and practice – even today their earliest efforts still feel remarkably fresh and like a vision of the future which has yet to fully appear.
Over the last few years we’ve been lucky enough to witness numerous reissues and archival releases which date from the Gruppo’s astounding first decade of activity, notably Superior Viaduct’s beautiful edition of the 1973’s self-titled release, and Die Schachtel’s “Azioni / Reazioni 1967-1969”, bringing their crucial contributions back into the centre of the contemporary consciousness. Now, we’re thrilled to highlight the emergence of yet another crucial piece in the puzzle – the reissue of what is arguably the rarest artifact in their catalogue – 1975’s “Gruppo d’Improvvisazione Nuova Consonanza”.
The collective’s fifth full-length release, encounters the project at its sublime best. This incarnation features Macchi, Morricone, Evangelisti, Mario Bertoncini, Walter Branchi, Giovanni Piazza, and Jesus Villa Rojo, each masterfully responding and intervening within an expanse of sound where no one voice takes centre stage. Delicate acoustic textures sculpt an endlessly surprising sense of tactile space, penetrated by percussive interventions and atonal squeals, each in their own way defying a concise image of source.
Wildly intelligent, and yet feeling so natural that these interactions of sound might have simply always been or appeared, the album captures an archetypal vision of one of the most important groups in the history of the avant-garde – a singular, and entirely new vision of improvisation and collaboration which laid the groundwork for a countless number of artists who followed in their wake.
Still thrilling and surprising, nearly half a century after it was first released, this is where it all began. The album was fully remastered from the original tapes, which revealed a different sequence than the original Cinevox album. Moreover, “Settimino”, the long track that opens the first side, has a completely different structure which can be listened here for the first time.