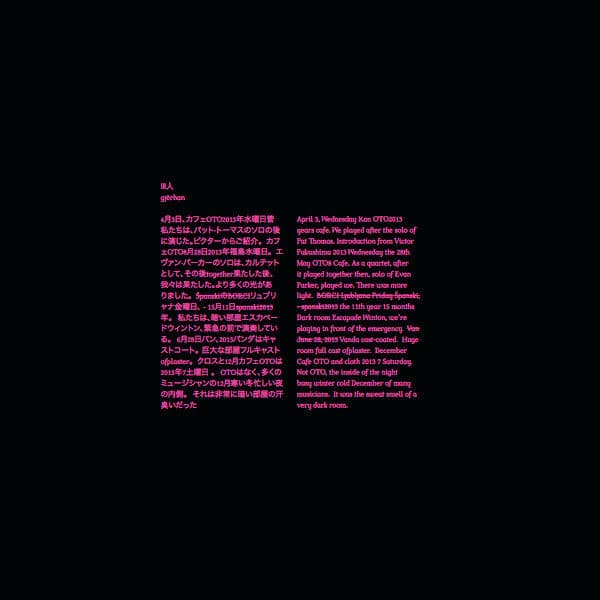 This recording includes two bare twentyminute excerpts from separate performances at Cafe OTO. Daichi Yoshikawa, feedback. Paul Abbott, drums. Seymour Wright, alto saxophone. From subterranea, sweat, haze and dedication emerging out of intimate and intense weekly meetings begun in 2009 – their first, 2012 public performance, squeezed into a London basement was a sheer, vexed and exhilarating smack of organic, heterodyning ideas, and taut, lowbeating lumps. Reemerge/revanish.
With the economy of familiar/traditional raw tools feedback, drumkit, alto saxophone, time, space and emotion lll move from molten musical pasts to grow future pleasures in sound. The ingredients are familiar, but the listening is not. At its heart is a still, undecorated concentration fuelling an extreme testing of limbs, language and order. This has no concern with collapsing difference into a vogueish flattened massfroth, but searches – forensically, ceaselessly – for something to chew, in the challenge of discretion and integrity or asylum in the body of its instruments. Akilsakilan learning, Doughnut.
Finding, twisting and hammering out an expanding musical universe balanced only by its own logics – lll have few obvious comparisons. Their performances are consistent radical negotiations of the emotional, physical and social energies of the environments they sound out.
Perfectly reasonable !
[The second side was recorded at a summer fundraiser concert for Project Fukushima (This followed a solo performance by Evan Parker who later joined the group for a quartet) and the first as part of the inaugural INTERSECT festival four months later.] Recorded at Cafe OTO on 28 August 2013 (Fukushima) by Stuart Bannister and 7 December 2013 (Intersect) by Kate Arnold. Mixed by Paul Abbott. Mastered by Andreas [LUPO] Lubich at Calyx, Berlin. Design by Paul Abbott. Inner sleeve by Paul Abbott, Cara Tolmie and Conal Mcstravick.