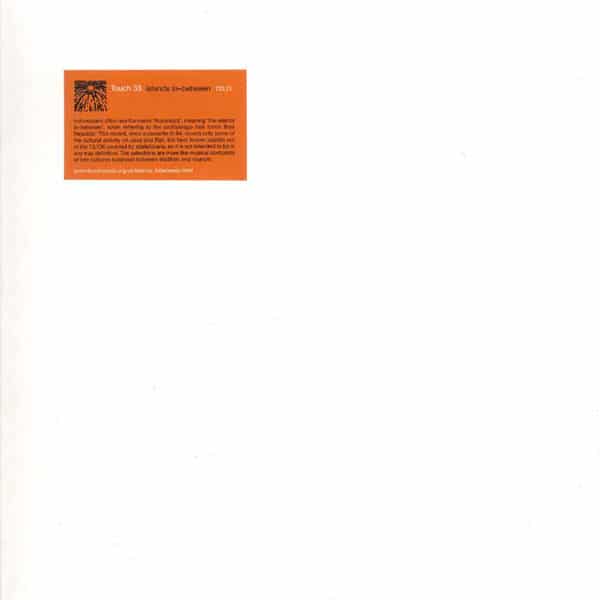 Edition of 500 vinyl and download only. A new series of vinyl and download only releases, “from the archives…”. Islands Inbetween was originally released on cassette in 1983 [Touch
T33.2]. 3 tracks, by John Keliehor & Orlando Kimber, have been removed from this edition for copyright reasons. The second in this series, “Drumming for Creation” [Touch
T33.3V] will be released in the autumn… Indonesians often use the name ’Nusantara’, meaning ’the islands in-between’, when referring to the archipelago that forms their Republic. This cassette covers only some of the cultural activity on Java and Bali, the best known islands out of the 13,700 counted by statisticians, so it is not intended to be in any way definitive. The selections are more like musical postcards of two cultures balanced between tradition and tourism. Side one : There is no specific translation for ’Gending Gending’. The term generally means ’orchestra’ or ’gamelan composition’. The Javanese word for hammer is ’gamel’, and the music is said to encourage the growth of plants. ’Suling’ – the end blown flute. ’Degung instrumental’ – from the Sudabese region of West Java to the speakers of tourists cafes. ’Genggong’ – the first Balinese instrument, a mouth harp made from the palm and played by Igusti Ngurah Togog at his homestay in Peliatan, Bali. ’Cremation Gamelan’ – a portable ensemble plays while the cremation tower is raised from the death pavilion. Before travelling a mile along the Peliatan road to the Temple of the Dead, the tower is spun around on its bearer’s shoulders to confuse the soul, preventing its return home to trouble the living. The overture played as the tower is set alight (with a magnifying glass – matches are thought to be unclean), is recorded on ’Touch Travel’. Dag combination dance – in Bali, individual dances are sometimes merged into modern adaptations, not only as a result of tourism – the gamelan elders think popularisation is the best way to attract young people to dance, though dividing lines are difficult to draw. ’Dag’ is a combination of ’Kecak’ and ’Kebyar’, performed from the squatting position in a pantomime style very popular with children. Attention is focused on the facial expressions of the dancers which interpret man’s ever-changing moods. ’King Rama’ – the story of the ’Kecak’ (monkey) dance is taken from the Hindu Ramayana epic and portrays Rama’a search for his wife, Sita, who has been abducted to the monkey forest. Rama is an incarnation of Vishnu, The Creator, and serves as an ideal for the Hindu man. ’Ramayana ll’ – the opening sequence of the gamelan acvcompaniment to the 4 part ballet held on the full moon-lit nights of June, July and August at Prambanan temple complex. The largest central temple is dedictade to Shiva, the destroyer. The voices that follow were recorded on a train at Bandung station at 3am, en route to Yogjakarta. Local sellers board trains whatever the hour, and every carriage becomes an indoor market. Side two : “Watermark” – nightfall by a bridge near the Monkey Forest, Ubud. ’One Language’ – there are c. 300 different languages and dialects in Indonesia. After independence in 1945, Bahasa Indonesian became the universally accepted language, though its use had already been encouraged by Nationalists as a political tool against the Dutch colonisers, and sanctioned by Japanese invaders who wished to spread propaganda to the villagers. ’Temple Gamelan’ – musicians play while women bring ornately prepared offerings to the temple shrines on auspicious days of the Hindu calendar. Spirits and demons cannot live without food and drink, so the women fan the essence towards the divine recipient before offerings are placed on the ground to waiting dogs. Smaller offerings made daily, are left at strategic points around the house and alongside the ricefields. ’Frog Sound’ – the sound comes from the reed mouthpiece of the genggong harp. Played by Togog and his son. ’Ducks’ – every morning young boys and old men direct the family ducks out of their pens and along narrow paths into ricefields that are wet enough to paddle in. ’Tenun’ – the Balinese weaving dance depicting women working at this traditional craft. ’Anjung’ – the name given to the hordes of semi-wild dogs that roam Bali’s villages, barking instinctively at any approaching white man. ’Garuda’ – Indonesia’s national symbol is the Garuda bird. Vishnu’s chosen vehicle and thus the king of flight associated with creative energy. Garuda is a dominant motif in Indonesian art, the name of the national airline and the seal of the official state coat of arms, beneath which appears the words ’Bhinneka Tunggal Ika’ – literally ’many are there but there is only one’. Cut by Jason at Transition. Edited by Jon Wozencroft, Mike Harding & BJNilsen. Design: Jon Wozencroft.