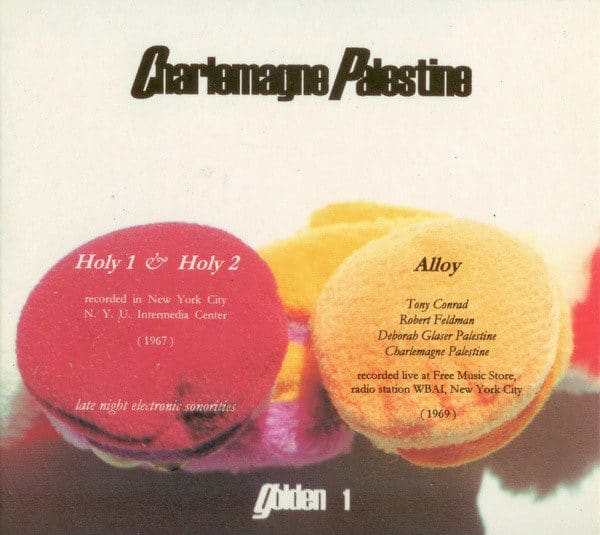 The Golden Research is the name choosen for the complete documentation of previously unpublished works by Charlemagne Palestine starting from the early 1960s to the mid-late 1970s. Such a huge project will include seminal collage and electronic music, Bell Studies, New York and California Drones, Piano drones as well as more specific compositions. All the recordings will be exclusively available through Alga Marghen. Be ready to change your own opinion about minimalism and music in general? Holy1 and Holy2 were both recorded in NYC in 1967. Charlemagne Palestine was listening to a lot of ethnic world music; he was also immersed in the late night New York soundscape and absorb the spatial sound diversity and beauty that such a big city could only express very late at night? He worked also at night building up a sound, oscillator by oscillator; then add tiny increments of white noise that would gradually make the sounds thicker and thicker until they were immense sacred machines humming like gargantuan tibetan bees. The sounds were played very very loud making all the room and objects in it resonate while outside all was quiet and sleeping. Holy1 & Holy2 were done this way. Then, in 1969, Tony Conrad asked Charlemagne Palestine to make some carillon music for his film Coming Attractions. They were seeing each other regularly when the Free Music Store of radio station WBAI asked Palestine to create a piece for an event they were preparing to broadcast live on radio. So he asked Tony, his saxophonist Bob Feldman and his then wife and soprano Deborah Glaser to collaborate on a work that he would organise around an instrument that he invented at that time called an Alumonium. Tony Conrad played an instrument that he invented, the Long String Drone, that was a long string attached to a long wooden structure and amplified. Bob played the chimes and a conch. Deborah sand and played chimes and Charlemagne sang, also played the chimes and some percussion instruments that they found lying around the hall where they played. The piece became Alloy and the sound used as all electronic background continuum, played through loudspeakers in the hall, were Holy1+2 from 1968. Digipak CD edition with folded insert and liner notes.”