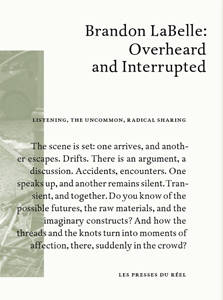 Texts by Fred Dewey, Edit Molnár, Jeremy Woodruff, interview with Brandon LaBelle by Elena Biserna. English edition, 21 x 28 cm (hardcover), 368 pages (color ill.)
Organised in 8 “episodes,” Brandon LaBelle’s reference monograph guides us through a number of his installation works and scripts from 2003 to 2014, raising questions of space and community, and further, to the direction of the social and its political potential. Three essays and an interview, as well as the recording on CD of a recent live performance, complete the book.
Compiling works and writings from the last 13 years, this comprehensive monograph on American artist, writer and theorist Brandon LaBelle captures the artist’s expansive practice. Originally from Los Angeles and currently based in Berlin, LaBelle has been at the forefront of the sound arts since the mid-1990s, developing projects that adopt methods of intervention and spatial practice, that work with voice and modes of address, and that stage scenes of public gathering based on notions of interruption and radical sharing. LaBelle is a highly unique artist and writer, engaged in collaborative and public work, and the monograph documents his diverse activities in a range of international contexts. It includes a CD of a live performance by LaBelle held at Club Transmediale Festival, Berlin, in 2015, essays on the artist by writer Fred Dewey, curator Edit Molnár, and cultural theorist Jeremy Woodruff, along with an interview with the artist by Elena Biserna.
Elena Biserna is a researcher at Locus Sonus, Ecole Supérieure d’Art d’Aix-en-Provence and Ecole Nationale Supérieure d’Art de Bourges. Her interests are focused on listening and on contextual, ephemeral and participatory practices in relationship with urban dynamics, socio-cultural processes and the everyday sphere. Her projects include: bip bop—a radio programme conceived as an exhibition space, and Walking from Scores—a collection of artists’ scores on walking, listening and producing sounds in urban space.
Fred Dewey is a writer, teacher, editor/publisher, curator, and co-founder of the Neighborhood Councils Movement in Los Angeles. He directed Beyond Baroque Literary / Arts Center in Los Angeles from 1995-2010 and has edited, published, and designed twenty books and anthologies, featuring work by Ammiel Alcalay, Simone Forti, Jean-Luc Godard, Daniel Berrigan, Abdellatif Laabi, Jack Hirschman, Christoph Draeger, Ed Ruscha, Diane di Prima, and more.
Edit Molnár is the director of the Edith-Russ Haus in Oldenburg (with Marcel Schwierin). Between 2010 and 2014 she worked as a freelance curator and critic between Berlin and Budapest. She earned a MA in Art History and Aesthetics / Art Theory from Eötvös Lóránd University, Budapest. In 2002 she participated in De Appel’s curatorial training program in Amsterdam. From 2000-2005 she was the director of the Studio Gallery Budapest, and worked as a curator of the M csarnok / Kunsthalle, Budapest from 2005 to 2007. She had been the director of the Cairo based independent art institution, the Contemporary Image Collective between 2007-2009.
Jeremy Woodruff is a Lecturer and Co-director at the Neue Musikschule Berlin, and Lecturer in Composition at the KM Music Conservatory in Chennai, India. His writings have been published by Klangzeitort (Berlin), Interference: A Journal of Audio Culture, Journal of Sonic Studies, Errant Bodies Press, and Verlag für Moderne Kunst (Nürnberg).
Brandon Labelle is a musician, artist, writer, theorist, curator and editor (founder of Errant Bodies). His work is based on performance, sound installation, recording and use of found sounds. LaBelle reflects fluently on his artistic practice, drawing attention to the social dimensions of listening and manner in which sounds, in multiple variations, play upon public spaces, and drawing connections across media and incorporate video, as well as architectural and sculptural vocabularies into an expanded field that embraces rhetorical and spatial challenges.