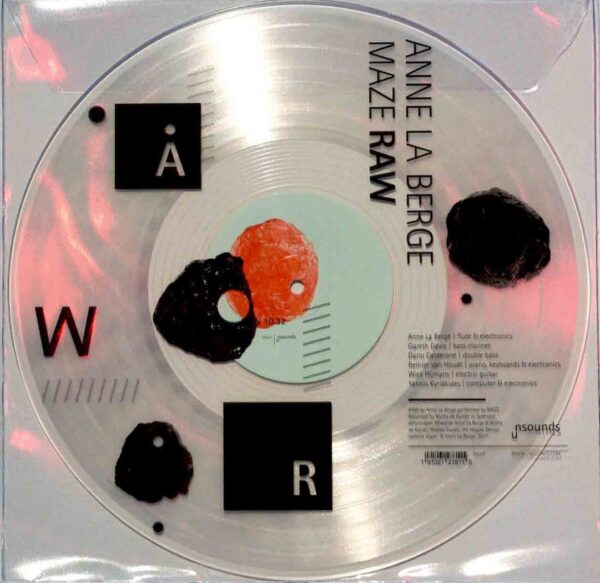 Unsounds is proud to present Anne La Berge’s new piece: RAW.
Originally from Stillwater, Minesota and based in Amsterdam, the avant-flutist, improviser and composer has written an open-ended work for ensemble and electronics made up of fragmented gestures and shards of skeletal speech. Ensemble MAZE, of which Anne is a founding member, is performing the piece which was recorded at live at Splendor, in Amsterdam, The Netherlands.
“Play noise. Do not play at all. Play melodically.”
RAW embraces the unbridled opportunities that unforeseen combinations offer in the improvising process. It is a work that asks the musicians to play unfinished musical material and to collectively create a work in real time, as they are asked to make ongoing randomly generated choices. For this new interactive work Anne La Berge has written a Max patch allowing each player to influence the development of the piece by sending a message to the patch at his or her own discretion by means of a touch on a tablet screen. The patch reacts in turn and ‘chooses’ the next combinations of players, the types of music to play, combined with the playback of pre-recorded text samples.
Without any one instrument taking the solo lead, Gareth Davis’s bass clarinet deftly folds itself around jarringly loose piano notes from Reinier van Houdt. Multi-layered electronics by Yannis Kyriakides divide and conquer throughout ensemble MAZE with brooding double bass by Dario Calderone, eerie electric guitar (Wiek Hijmans) and La Berge herself on processed flute. The players follow commands and take cues in an unending whirlwind of cause and effect.
RAW exudes auras of condensed, stretched, cut-up, pried open and exalted sonic spaces. Pure and raw timbres collide with processed materials, questioning the way in which the ear finds or loses familiarity with musical idioms. And where musicality is to be found from clouds of juxtaposed idiosyncratic sounds. The piece cuts through worn musical habits and jettisons both audience and player back and forth squarely and simultaneously to point zero & point omega. To go even beyond that which music is, is where the fiery
spirited and elemental heart of RAW lies.
Artists: ensemble MAZE, Anne La Berge, Dario Calderone, Wiek Hijmans, Yannis Kyriakides, Gareth Davis.