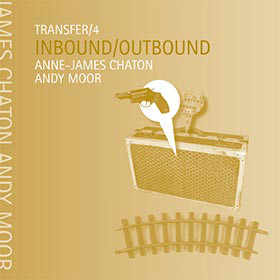 Long awaited fourth installment of the Trasnfer Series, a series of seven inch singles by guitarist/composer Andy Moor and sound poet Anne-James Chaton, exploring the themes of transition and transportation, side A constructed from factual information and side B from fiction. With “Inbound/Outbound”, we’ll be going by train… On side A “Metro” Chaton and Moor map interconnecting metro stations over the world, with guests reading out the names of the stations from their own cities, including a.o. fellow musicians DJ /Rupture for New York, John Edwards for London or Alva Noto for Berlin. Side B, “Not Guilty”, takes us on more sinister tracks, with Chaton listing the suspected murderers featured in all of Agatha Christie’s novels, all of whom are sentenced as not guilty of the crime committed in one of her most famous novels, “Murder on The Orient Express”. The music on both these tracks has a rhythmic dub feel contrasting with earlier tracks in the series, with a guest appearance from Lebanese Paris-based Christine Abdelnour on saxophone.